By Jean Peerenboom | For The Compass
March 15, 2017
Bishop David Ricken will join congregation for March 19 celebration

​It has been a year of celebration at St. Joseph Parish as it marks its 150th anniversary. On March 19, the festivities will culminate with a jubilee Mass at 10 a.m. with Bishop David Ricken officiating.

A parish brunch at the Radisson Hotel will follow. 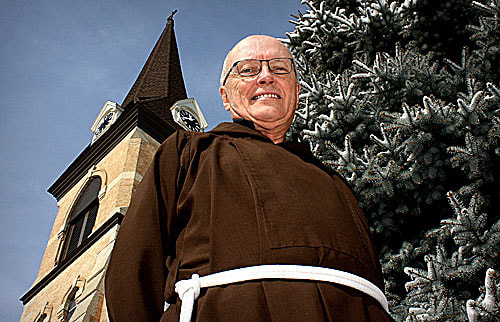 Capuchin Fr. Jim Leary, pastor of St. Joseph Parish in Appleton, said the parish’s 150th anniversary has helped the parish “realize the great and steady contributions its members have provided in the Fox Valley.” (Brad Birkholz | For The Compass)
Capuchin Fr. Jim Leary, pastor, said the celebration was kicked off in April 2016 with a social of coffee, wine, cheese and jubilee cake after each Mass. Beginning with that April 2-3 weekend and throughout the year, a walking tour of historical artifacts has been on display.

“The parish’s youth group reached out to St. Joseph Food Pantry by collecting donations of food and money at the Farmers’ Market in downtown Appleton throughout the summer,” Fr. Leary said. “They also put together a jubilee float for the city’s Christmas parade. In February, they collected laundry detergent and clothing baskets for “The Warming Shelter” in Appleton.

The youth group’s activities are an example of the parish’s “proud heritage of reaching out in support of the needs of the community,” the pastor said. “In recent years, the parish has been helpful in establishing the St. Joseph Food Pantry, the Warming Shelter and LEAVEN, and has participated in building Habitat for Humanity homes.”

A highlight of this jubilee year, Fr. Leary continued, was an ecumenical Thanksgiving prayer service with other churches in Appleton.

In October, a parish mission was led by Capuchin Fr. Bill Cieslak. “It featured the invitation to look back and look forward at all that’s been a part of St. Joe’s history,” Fr. Leary said. “One aspect of this jubilee year is to give thanks for the presence of the Capuchin friars for the past 140 years. The parish has had 33 pastors; all have been Capuchins except for the first two, who were diocesan priests.”

St. Joseph Parish has its roots with German immigrants. When they began to migrate to Appleton in the 1800s, they wanted to sing and pray in their native language. Milwaukee Archbishop John Henni gave the community permission to build their own church in what is now downtown Appleton on March 18, 1867, the feast of St. Joseph. It was dedicated on Dec. 13, 1868, by the Green Bay Diocese’s first bishop, Bishop Joseph Melcher, and the first pastor, Fr. John Nussbaum, arrived on Feb. 26, 1869. It is Appleton’s second oldest parish.

There were tensions between parishioners and pastors in the beginning and in 1875, Bishop Francis Krautbauer turned to the Capuchin Franciscan friars for help. They accepted the pastorate and took possession of the parish on April 22, 1877, with Fr. Didacus Wendel as the first Capuchin pastor.

As the parish grew, a school, rectory and convent were built. Over the years, the growing congregation adapted to changing times.

Schools and religious education have always been an important part of the parish’s ministry. For many years, it operated a school that went through ninth grade. Today, St. Joseph Parish is part of the pre-kindergarten through 12th grade St. Francis Xavier Catholic School System, which involves all eight of Appleton’s parishes.

The parish has also worked closely with Appleton’s other downtown parish, St. Mary. Since the late 1970s and early 1980s, the two parishes have collaborated in many areas, especially in education. For the past 20 years, they have worked together in religious education, sacramental preparation and other educational programs for all ages.

The 150-year-old parish also has seen growth in its facilities, including an addition of a gathering space for the many parish activities and groups to use.

“This jubilee year has helped the parish realize the great and steady contributions its members have provided in the Fox Valley,” said Fr. Leary. “By God’s grace, we’ve come a long way from the struggles and sacrifices of the German pioneers who began this parish.”